We offer guided climbing Himalayas expeditions from South Africa which include: Annapurna’s, Island Peak, Mera, Pumori and Mount Everest. The Himalayas, or Himalaya, is a mountain range in Asia separating the plains of the Indian subcontinent from the Tibetan Plateau.

The Himalayan range is home to the planet’s highest peaks, Mount Everest, the highest of them all. The Himalayas has over a hundred mountains exceeding 7,200m (23,600 ft) in elevation. The highest peak outside of the Asia is Aconcagua, which is situated in the Andes Mountains and is 6,961m (22,838 ft) tall. Many Himalayan peaks are sacred in both Buddhism and Hinduism.

Besides the Greater Himalayas of these high peaks there are parallel lower ranges. The first, reaching about a thousand meters along the northern edge of the plains, are called the Sivalik Hills or Sub Himalayan Range. Further north is a much higher range reaching approximately two to three thousand meters known as the Lower Himalayan or Himachal or Mahabharat Range. 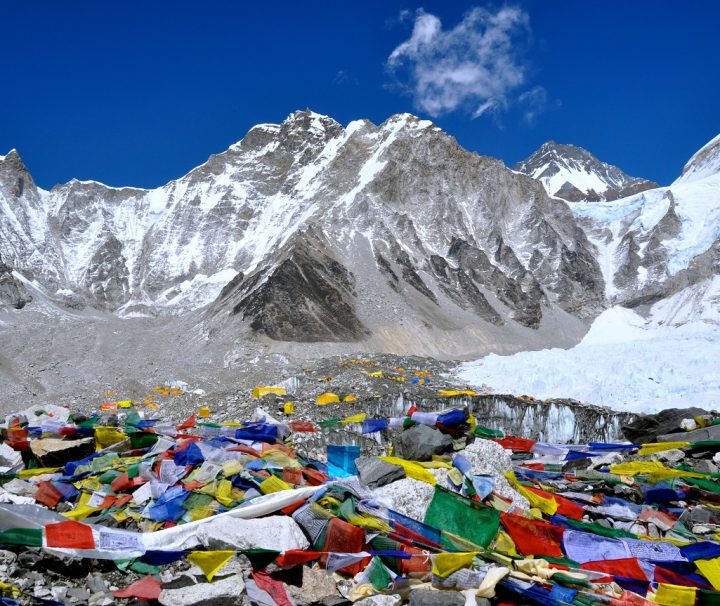 Everest Base Camp, situated at 5380m is a mixture of incredible mountain scenery, a mind blowing cultural experience and a
5.00 / 3 reviews
R39,900
per person
view tour

This Everest & Island Peak expedition includes some awesome snow and ice climbing to a height of 6,189m.
R48,900
per person
view tour

The pre-monsoon season starts around the end of February and continues until the end of May. Early March is a good time to visit places at a lower elevation (between 800m and 2000m), such as the Annapurna middle hills north of Pokhara, because it is pleasant trekking conditions in cool temperatures.

As April and May approach it will be very hot & sweaty at these lower altitudes and the views will be poor with a haze blocking out the Himalayan peaks. The haze comes from surrounding areas where pollution is at its high. If you are looking at trekking over 5000m, it is better to leave it until April & May. If you attempt passes in March you will normally find that they are still blocked with winter snows, whereas by April and into May muchofthissnowhasmelted.

A typical characteristic of pre-monsoon weather is to get clear blue skies in the morning with clouding building during the day. Often there is precipitation in the afternoon and then the skies clear off again in theevenings.

One of the main advantages of trekking in the pre-monsoon season is that there are fewer other trekkers around compared to October & November. Importantly, this also means that it is easier & cheaper to get flights to Kathmandu at this time of year.

October is the most popular trekking month in the Himalayas. This is because the weather is generally calm with clear blue skies and, unlike the pre-monsoon season, it is often clear for the whole day with no afternoon cloud blocking the sun.

The beginning of the post-monsoon trekking season starts at a different date each year as it depends on when the monsoon finishes. Sometimes the stable weather can start in early to mid September whereas other years it can go into October. In October 2007 there was still heavy rain into the first week of October causing the flights to Lukla to be cancelled for 5 days!

By mid October the weather should have calmed down, this is the best time to view the Himalayan peaks and for photographers, this is the best time to take those amazing pictures, because the monsoon has cleared the dust and other impurities from the air. As the season progresses into November the weather becomes more stable and predictable with most days having sun and blue skies. The temperature begins to cool off especially in the evenings once the sun has gone down, for this reason you should make sure you have a warm sleeping bag!

It is also possible to trek during December although of course the temperatures are colder at night.

Summer is not a good time to visit the Himalayas due to heavy rains associated with the monsoon. The heavy rain causes landslides on many trekking routes, avalanches on the high peaks and lower down there is likely to be leeches.

Most people prefer not to trek during this period as it is very cold, but one can still trek if you are properly prepared for the conditions.

The Himalayas takes over about six countries: Nepal, Bhutan, India, China, Afghanistan and Pakistan, with the first three countries having majority over most of the range. The Himalayas are bordered on the northwest by the Karakoramand Hindu Kush ranges, on the north by the Tibetan Plateau, and on the south by the Indo-Gangetic Plain.

Three of the world’s major rivers, the Indus , the Ganges and the Tsango-Brahamputra, all rise near the Mountain of Kailash and cross and encircle the Himalayas. Their combined drainage basin is home to 600 million people.